Most of Enid's books are for people of around four to fourteen plus, but she also writes for adults. At present, she's trying to get her head around self-publishing two adult novels. If you'd like to sample a taste of her adult fiction, she has a short story: "GEMINI", in the forthcoming AuthorsElectric anthology: "A FLASH IN THE PEN" which launches on June 21st at a special month-long price of 99p/99c.

Enid's first published book was the much-loved "THE TIME TREE" (Walker Books), which stayed out there for a very long time, but which, eventually, as so often happens, went out of print. Recently its film potential has attracted the attention of Wild Thyme Productions, but if/when it might happen is anyone's guess. For this reason, she hasn't re-issued it as an e-book.

When so much of her published work went out of print, Enid's husband, David, set about publishing her backlist as e-books for the Kindle, which is how she became involved with AuthorsElectric (sadly, David died suddenly two years ago). Right now, there are eleven of her books available on KDP Select, to buy or to borrow. Here are just some of them (and do remember, if you're American, to click on .com rather than .uk) 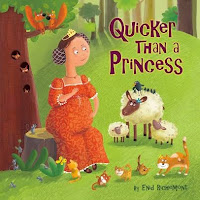 Enid's work has been published in the USA, Australia, Denmark, Germany and Japan (she particularly loves the Japanese version of "THE DREAM DOG", with its sensitive soft pencil illustrations). And yes, she still has an agent, but not the original one! At present, she's been concentrating on picture books, and now has two out there and thriving - even featuring in a Sainsbury's promotion. Here's one of them.

Her semi-fantasy Y/A novel"FOR MARITSA WITH LOVE" was first published by Simon & Schuster, with a glittery launch party and great reviews, but again - you've guessed it - within a relatively short time it was out of print. The story's based on a real Roma child Enid encountered on the Metro when she was living in Paris, and its theme, of alienation and immigration, is even more relevant now. She's always seen it as a French language film, and is still hoping for some French film maker to fall in love with it (it's also a celebration of Paris). There are no digital versions of this book yet, but you can still find it on Amazon.

PS. And if you have any kindergarten readers in your family, check out Enid's extensive list with Franklin Watts (Hachette).